Note: The NHANES Biospecimen Program processes were reevaluated in 2021 and 2022 to monitor quality control after a procedural error was identified. This error did not pose any risk of participant disclosure. Addressing this error resulted in the removal of some records from various stored biospecimen data files between 1999 and 2018 that did not meet program standards. After a comprehensive review of all stored specimen datasets, this data file was modified to remove records (<5% of records) that were initially included in error. No data values were altered. The sample weights and overall estimates were compared between the original and revised files. The sample weights provided with the original data release are appropriate to use with this updated data file; therefore, no new survey weights were created. The overall estimates from these files were examined and are consistent with the previous file. However, not all possible analyses were performed.

IgG autoantibody testing of a subsample stored serum of specimens from NHANES (1999–2004) was conducted to estimate the prevalence and specificities of selected autoantibodies in the US population in 1999-2004.

The cellular pattern of staining and its staining intensity from 0 to 4+ was described using a reference gallery per below. The determination of autoantibody titers from 1:80 to 1:1280 was performed by serial dilution on samples that showed a 3+ or greater nuclear and/or cytoplasmic immunofluorescence pattern.

Sera that showed known autoantibody specificities based on visible immunoprecipitated protein bands consistent with the combination of bands and their estimated size per the table below were recorded. Immunoprecipitated ribonucleic acid bands on stained gels were also recorded when they were needed to confirm the specificity. When necessary, the size and the pattern of migration were compared with reference sera (Reeves WH,et al., 2006).

Immunofluorescence analysis
Serum samples were tested using established protocols outlined by manufacturer. A set of CDC autoimmune reference sera (12 different specificities) (Chan EKL et al., 2007) and 2 healthy control sera were coded and tested in a blinded fashion two times to verify consistent results throughout screening test: towards the beginning and when approximately half of the samples were tested.

Samples that showed common bands were repeated in parallel side-by-side fashion for comparison with each other and with known controls as needed.

Assay reproducibility was initially assessed by random selection of the ANA 3+ or 4+ sera number of serum specimens tested and repeating the immunoprecipitation assay. The percentage of samples that were repeated was actually 15% (103/692) of the sera tested by IP.

The analysis of NHANES laboratory data should be conducted using the key survey design variables. The NHANES Demographic data files for each 2-year survey cycle contain core information on the survey and the survey design variables for strata and PSU (SDMVSTRA and SDMVPSU, respectively) which are recommended to be used in variance estimation. This laboratory data files may be linked to other NHANES data files using the unique survey participant identifier SEQN.

A standard gallery of images showing the intensity of staining and the cellular patterns of reactivity is shown below and the following patterns were reported: 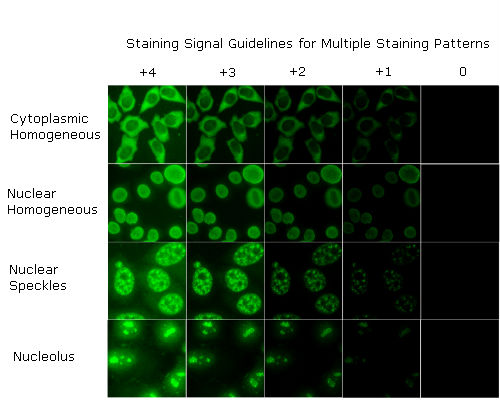 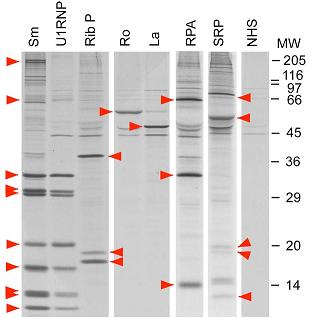 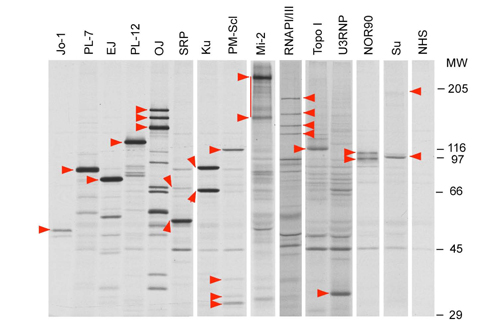 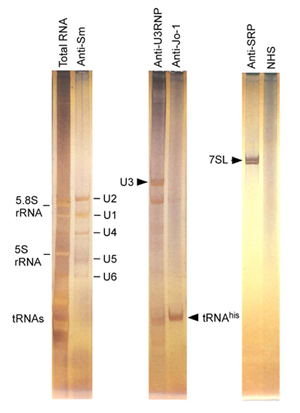 SSRNAPOL - RNA polymerase I and III