The Frequency Doubling Technology (FDT) subsection of the Ophthalmology Component tests for visual field loss from eye diseases, such as glaucoma, using the Humphrey Matrix Visual Field Instrument. Specifically, the N-30-5 FDT screening protocol was administered to survey participants. It is a 19-point supra-threshold screening test that was administered prior to the Retinal Imaging Exam.

Participants aged 40 years and older were eligible to participate. Persons were excluded if they were blind (i.e., unable to see light with both eyes open), had an eye infection, or had eye patches on both eyes.

The FDT exam was performed by trained health technicians in a specially equipped room in the mobile examination center. The exam was conducted in the dark with the participant seated in a chair in front of the Humphrey Matrix instrument. The lights in the room were turned off prior to the start of testing to allow the participant’s pupils optimal dilation for the Ophthalmology Retinal Imaging Exam. While looking into the Humphrey Matrix instrument through a visor, participants were asked to fixate on a central target (black square) and to press a thumb switch when they detected the appearance of peripheral targets. Each peripheral target was a 10 degree square, shown on a dim, colorless screen within the instrument. The instrument automatically varied the contrast between dark and light portions of the target to determine the contrast at which the target could be detected (Humphrey® matrix Visual Field Instrument User’s Guide).

Technicians emphasized the importance of focusing on the black square and explained the procedure with repetitive statements regarding fixation on the black square throughout the exam. A practice test was run prior to the actual test to determine whether the participant understood the test procedures. The test always started with the right eye, followed by the left eye, and then the test was repeated for each eye. 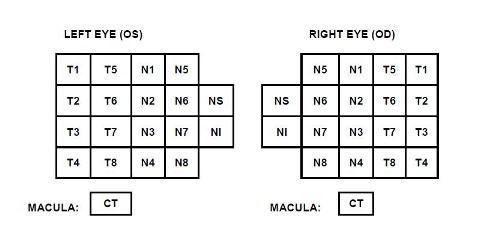 Each visual field location was tested until the participant responded, or until all probability levels were tested. As a result, the screening test time increased for participants with eye disease.

Test results for visual field locations were classified into probability levels based on age-corrected normative values. Targets were presented at a contrast level that 95% of healthy age-matched subjects would be expected to detect. If the target was seen, the visual field location was not retested and identified as normal at P≥5%. If unseen, the field was retested at the same contrast. If the second target was not seen, it was then presented at a contrast level that 98% (or P of 2%) of healthy subjects were expected to see. The location was labeled as P<5% if seen, and retested one last time at a higher contrast level at P of 1% (expected to be seen by 99% of healthy subjects) if not seen. Seen locations at this point of the testing were given a P<2%, and missed locations were labeled as P<1% (Humphrey® matrix Visual Field Instrument User’s Guide).

During each test, reliability checks were performed at random times, which included three False Positive Tests and three Blind Spot Tests. There were no false negative tests. The Blind Spot Test gives an indication of how well the participant maintained fixation on the central target throughout the test. Three times during each test, small (1º) targets at a high contrast (50%) were placed in the expected physiological location of the blind spot (the Heijl-Krakau method). These targets should not be detected in nearly all individuals when proper fixation is maintained. Fixation errors indicate the participant was not maintaining good fixation during the test, was misaligned, or did not understand the test. False Positive Tests were used to check that the participant was responding to seen targets. Three times during testing, blank targets at 0% contrast were periodically tested to check if the participant responded even when no stimulus was presented. Subjects that are anxious or “trigger happy” tend to give high false positive results. False positive errors indicate the participant is pressing the button even if the participant doesn’t see any patterns or does not understand the test. Health technicians also recorded if the participant’s eye wandered and if they were unable to maintain fixation on the black square throughout the testing period (Humphrey® matrix Visual Field Instrument User’s Guide).

Quality assurance/quality control procedures for the visual field component included development of standard procedures for the collection of data and intensive training and evaluation of health technicians. Technicians were monitored at regular intervals by NCHS and contractor staff. Midyear and annual retraining sessions were conducted with the health technicians to review data collection procedures and reinforce proper protocols and technique.

For details on the QA/QC process for this component, please refer to the NHANES Ophthalmology Procedures Manual on the NHANES website.

Data were captured by the Humphrey Matrix FDT instrument and transferred to the survey database system. During the editing process, all data were examined for logical inconsistencies and technician or equipment errors. Edits of the data were performed when errors were detected.

OPASCCT1 (FDT Exam Status Comment) is a quality control variable that allowed NCHS to monitor the component and the reasons technicians provided for why an exam was not done or incomplete. The data were not collected for analytic reasons but for quality control purposes. This variable is only provided in the data release file to allow analysts to have some information on missing data and possible reasons for non-response.

Various algorithms may be used to define visual field loss. For this data release file, the 2-2-1 algorithm incorporating the reliability indices defined persons as normal or positive or having insufficient or unreliable data to make any assessment.

Variable Name:
VIQ141
SAS Label:
Which eye?
English Text:
If so, which eye?
Target:
Both males and females 40 YEARS - 150 YEARS